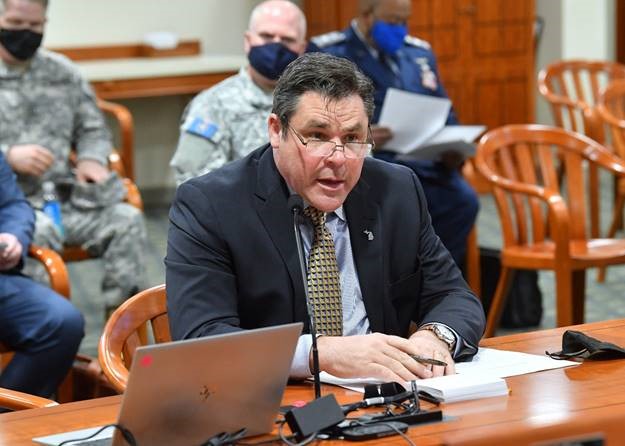 Rep. Damoose testifying this week on his resolution to help members of the Michigan National Guard.

The resolution also calls on the National Guard Bureau to immediately end the woefully inadequate current food contract that resulted in moldy oranges, undercooked chicken and other woefully poor service.

“The men and women in our Michigan National Guard deserve better – much better,” Damoose said. “We’ve got to make this right, and it starts with this resolution. I am going to hold the Washington bureaucrats who made this horrible food contract decision accountable, and demand our brave service members get some compensation for the inedible meals they were served while deployed in our nation’s capital. And I will also work to make sure something like this never happens again.”

The Michigan National Guard service members have been on duty in the nation’s capital since mid-January to assist with security. The deployment is expected to end very soon. The Damoose resolution calls for the service members to receive a per diem food allowance backdated to the start of the mobilization.

The measure is House Resolution 47.

State Reps. Beau LaFave, Sara Cambensy, John Damoose, and Greg Markkanen, along with State Sens. Ed McBroom and Wayne Schmidt today responded to a TV 6 report stating the governor had included them in her reopening metrics.

Rep. Damoose talks about the new pandemic orders taking effect Thursday that loosen some restrictions on gatherings and mask use, but says they still contain pages of rules that defy common sense.

Rep. Damoose talks about what he is hearing is a growing shortage of workers in northern Michigan, due, in part, he believes, to continuing COVID-related unemployment benefits.